For Forms Changes, the protocol that our developers follow is:

(if the field has previously been hidden)

How can I have the same piece of information display on different forms?

How can I make it so that a user only sees certain fields on a form?

The way Primero does this is by limiting access to particular form sections. Say you have two users, one who has the “Social Worker” role, and another who has the “Medical Worker” role, and both of whom need to have access to the “Quick Info” form. The standard basic identity form contains the fields “Name,” “Age,” “Sex,” and “Protection Concerns,” but you only want the medical worker to have access to “Name,” “Age,” and “Sex.” The best way to do this would be to create a special form for the medical worker that only contains those three fields. 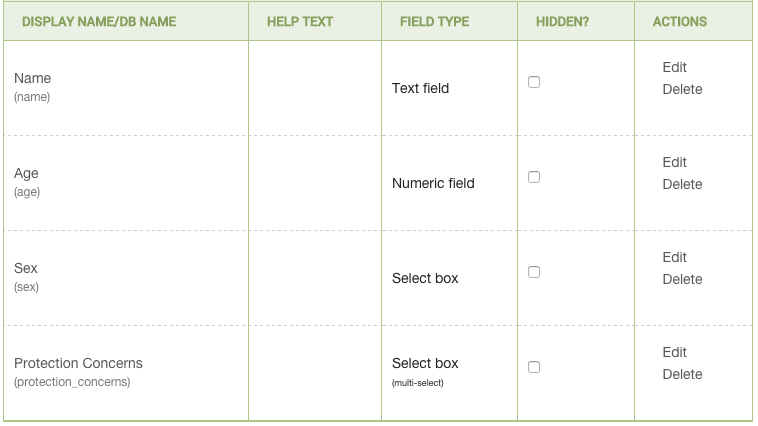 Because both forms contain three of the same fields with the same DB names, they will display the same data. In the image above, for the “Quick Info Medical” form, the DB names are the words in parentheses below the display names. So, for the “Name” field, you should see “name” below it in parentheses. The same is visible on the “Quick Info” form. This means that if the social worker records the name on their form, the medical would be able to see the same name on their own form later.

Why is there a “Full Name” field if there are also “First Name,” “Middle Name,” and “Surname” fields?

Having a “Full Name” allows quick data entry during scenarios requiring rapid registration, while the “First Name,” “Middle Name,” and “Last Name” fields allow users to more precisely record their case’s name. Only the “Full Name” field is searchable in the case list view. For this reason, it is preferable to record the subject’s name in this field.

Broken Images .
Can you please provide new images for the above query

This method won’t work for sub-forms. How to display the same information on sub-forms & thanks for your help now in my case the rest of the forms works exactly as I wanted. i.e one user can only read and others had both read and write permission. But for sub-form, it doesn’t seem to work the same way the normal form works.

Is there something that can be done for the sub-forms so that one user can have only read permission and others can have both read n write permissions.

No, subforms are part of the form and the system does not allow you to have read of one part of a form and edit on others. If this behaviour is what you require, you would need to create 2 separate forms.