We have had the issue that when a caseworker or case supervisor would go to press on the Search box in the right corner (when it is blank), it shows the total number of cases for other agencies, first we go for setting and remove the permission for (Search for case records owned by other users), this has worked for caseworker role, but not for a supervisor role, so we go again and remove the permission of (manage) under the case and then remove (read) under agency which make this work for other roles as well,

Hi Nebras, the reason this happens is because of the user groups the supervisor is part of. You first need to go to each of the supervisor user profiles. Then, scrolls down to the section that says “User Groups”. User Groups represent teams of users working together. A manager of a user group will have some level of access to all of the data managed by that group, but not to identifying information, and not the data managed by a different user group. Therefore, User Group creates teams of users who can share information with a supervisor or manager. However, what the users in this group can see is governed by the breadth of data set in the role. 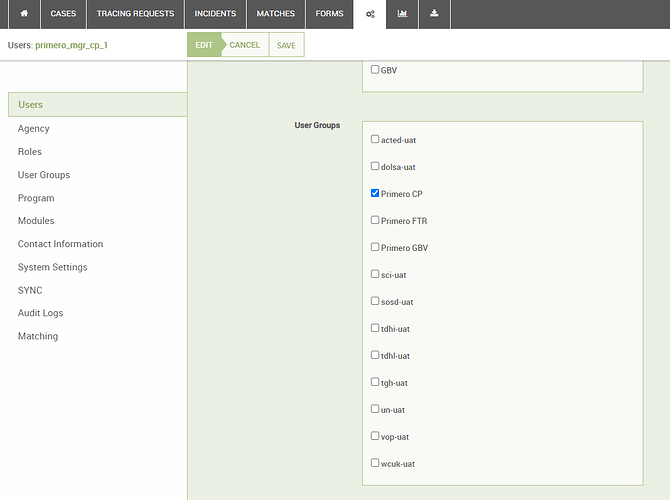 I understant what you clarified, but if we do so and remove the supervisors from their team users groups, how will they be able to supervise their teams especially if we have a considerable number of supervisors under one agency, actually this is what we have faced when we start launching the system, as the supervisors were not under their the same user group, so we faced issues of a case worker cases are seen and then sent to different supervisors??? however, if we need to untick for the option of primer CP under user group as in the photo, will that be the solution?

Hi Nebras, lets discuss this over a call because it would be best to walk us through how the user groups are set up. I will email you directly.